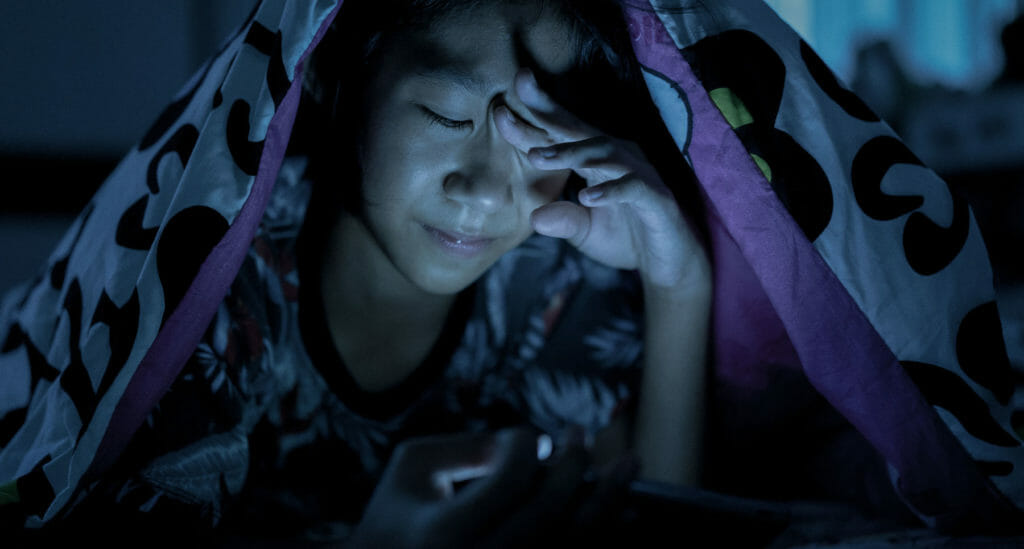 Many people are starting to connect the dots between blue light and eye damage.

A color in the visible light spectrum, blue light appears in two ways: naturally in sunlight, and unnaturally in technological devices ranging from lightbulbs to cell phones.

Protecting your eyes from too much exposure to blue light isn’t as simple as avoiding it, because we need blue light to run our body’s master clock and, consequently, every other physiological program.

Why Unnatural Blue Light Is Damaging

In your mind, picture a high-speed video of a tree growing out of the ground and maturing.

Notice how you didn’t have to add in the image of sunlight? It was placed there automatically. It’s likely you intuitively understand that sunlight is simply a set of instructions for living things to grow and function.

Preceding human existence were some 600 million years of sunlight the planet needed to evolve and support human life. This means your eyes were evolved to see sunlight and all the colors it contains.

Blue light from technology has done a fine job of creating light at night, but it does a poor job of mimicking what the eyes were evolved to see, which is full spectrum light in the hours of a solar day.

Unnatural blue light is missing other life-giving colors in the spectrum, like infrared and ultraviolet. This results not only in an isolated light frequency that’s foreign to the eye, but an intensity that’s unmatched by blue light from the sun.

The “volume” of unnatural blue light isn’t necessarily louder to the eyes, it’s just more intense—like a screaming guitar solo that scorches your ears as you turn down the other instruments. And just as super-loud frequencies and hearing damage go hand in hand, so do blue light and eye damage.

Light is seen by a number or cameras (or “opsins”) in the eye. Some cameras are only there to see daytime images or nighttime images, and the rest are non-image-forming cameras. These cameras transmit light’s messages along the optic nerve until they arrive to and are interpreted by the brain’s master clock, the suprachiasmatic nucleus (SCN).

When this light is unnatural blue light, the way it affects cells in the eyes’ cameras is anything but natural. The destruction of molecules and electrons changes the shape of the cell, while also disconnecting these cameras from their bond with vitamin A—a bond these cameras need to be serviceable.

“Being serviceable” means passing on critical instructions to billions of cells in the body so that you can perform optimally. It also means being able to make vital hormones and neurotransmitters like melatonin (the sleep hormone), serotonin, and dopamine.

Something to consider is that damage to the eye doesn’t only mean ailment in the eye.

Damage to your eyes is damage to your entire living system. Anything that slows down or confuses signaling from your master clock to the rest of your cells will change the timing of your biology.

“Mistimed biology” is another way of describing such diseases and conditions as insomnia, depression, obesity, diabetes, and cancer. Researchers are also starting to make connections between damage to photoreceptors by blue light and brain disorders like dementia and Parkinson’s disease.

If it seems unusual that blue light could be responsible for basically any of these modern diseases, consider the image of sunlight and the tree. If there was damage to the roots of that tree, what would be the limit of the symptoms from that damage?

Also consider the term “modern diseases,” as these diseases were almost non-existent before the advent of technology.

Most people think of the eyes as being solely for vision, but science has shown us that they are the catalysts for optimal circadian rhythm.

One effect of unnatural blue light is very clear: It destroys everything in its path, from molecules to tissues. The initial consequence of this destruction is inflammation, the immune system’s response to heal and repair from damaging incidents.

Inflammation in general doesn’t become a problem until the inflammation doesn’t stop.

Let’s take a look at the eye, from the outside in, and highlight some of the problems inflammation from blue light causes along its path.

When blue light makes contact with cells in the cornea, the very front edge of the eye, it causes oxidative damage. Inflammation then occurs as antioxidants are rushed in to account for reactive oxygen species (ROS) that have been liberated, or released, by the blue light.

When blue light is pervasive and this inflammation is chronic, the eye simply can’t keep up with its need to heal, and dryness becomes the first symptom as local cells lose the lubricative support of tear film.

Another inflammatory response occurs deeper in the eye when the lens loses its transparency due to yellow pigment building up in order to protect the retina from blue light. This is a response that’s built into our biology to enable us to see blue light from the sun with no issue and maintain a healthy circadian rhythm.

This inflammatory response is well maintained by the other colors in the spectrum. Think of infrared and ultraviolet light as the fiber that balances out the sugar (blue light) in fruit. Ultimately, the absence of blue light and occurrence of sleep keep this pigment from building in excess.

The constant inflammatory response to blue light leads to a buildup of pigment that blocks the lens, forming the condition known as cataracts.

Another part of the eye targeted by blue light is the macula, an area of the retina where central vision is organized.

When blue light degrades cells in the retinal pigment epithelium (RPE) that surrounds the macula, oxidation of the cells occurs—which leads to even more inflammation and ROS, due to the density of cells and mitochondria in the retina.

The surrounding proteins, cells, and mitochondria fall victim to something dubbed the “butterfly effect,” where oxidative stress to a single cell targeted by blue light causes radiation that spreads peripherally. In other words, blue light ignites a toxic fire that spreads to other parts of the eye, including the macula, inciting macular degeneration.

Other factors like genes and age also contribute to the development of macular degeneration, but studies are showing blue light alone can cause or speed up the process.

Wearing blue light glasses are the best way to control what kinds of light your eyes get exposed to.

Wearing blue light glasses when working on a computer all day and after the sun goes down is the best thing you can do for your eyes. With protective coatings that block specific light frequencies, high-quality blue light glasses will ensure you never see light you weren’t designed to.

Be careful with marketers who sell clear or yellow glasses as nighttime glasses. Those don’t block the most harmful frequencies of blue light.

Using blue light filters on your computer and cell phone offer complementary protection to blue light glasses. Iris has the best software on the market for this, allowing you to block as much blue light as you would like. Doing so can make the screen difficult to read, but you can find a level of protection that suits your eyes, and then let your blue light glasses block the rest.

Red light bulbs are a fun and easy way to block blue light. Try designating certain light fixtures as “night lights” and only use red after sunset. The red lights will block an extremely high percentage of blue light, while allowing great visibility for nighttime functionality.

If taking any of these steps feel extreme, don’t worry. In a short period of time you will adapt—and, most likely, find it difficult to look at blue light in any other way ever again.

Getting on Blue Light’s Good Side

Getting enough natural blue light will help keep your internal clock and circadian rhythm running effectively. That’s why nature put it there.

Healthy UV light exposure is important too, because it sends blood to the surface of your eyes’ choroid to help sooth the dryness caused by inflammation. This is why 15-minute “sun breaks” throughout the day, especially when working in a blue-lit office, can be helpful.

Morning and evening infrared light, when UV light is absent, will also increase your capacity for receiving more UV and help you receive UV light responsibly.

The thought of UV light being harmful is becoming less popular as more studies indicate its purpose and how we were evolved to see it with cameras in the eyes and skin called neuropsin, which are designated just for seeing UV light, and were only recently discovered in 2009.

The more exposure you get to the light we evolved to see, versus the light that surrounds modern diseases, the better chance you have to prevent eye damage from blue light.