What Is Blue Light? 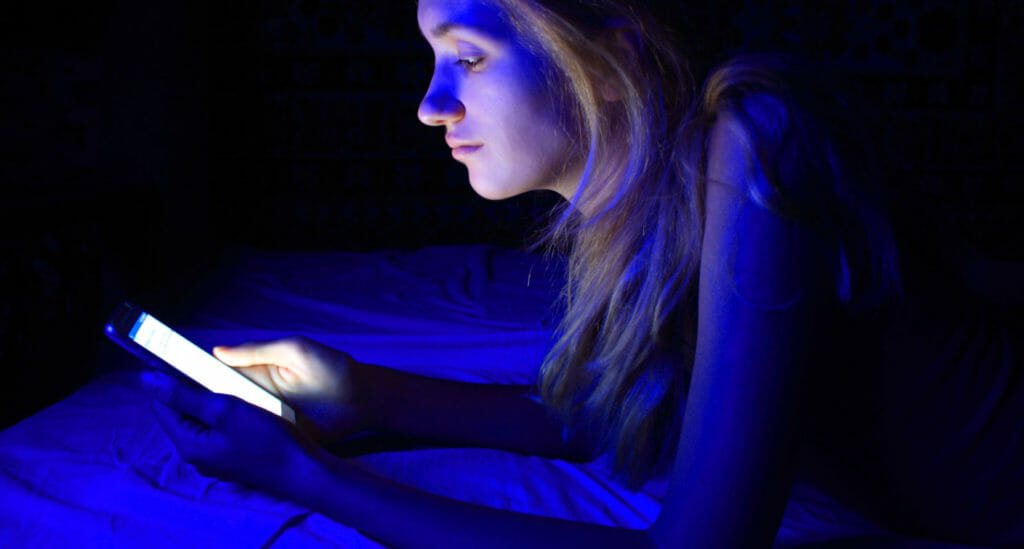 Blue light is a color in the visible light spectrum, with a wavelength between approximately 380-500 nanometers (nm).

A more thorough understanding of what blue light is can be complex for a few different reasons, mainly that not all blue light is created equally—presenting health implications that are both enabling and disabling.

Another aspect of blue light is that some blue light doesn’t appear to be blue. This distinction within one color is indeed confusing and can make blue light less obvious—and you less aware of the effect it’s having on you at any given time.

Some clarity and a better understanding, however, can be achieved. And because almost every waking moment of every day has some relationship to blue light, an awareness of what it is, where it comes from, and what this means for your health is important.

Blue Light Exists for a Reason

We’ve all witnessed sunlight reflected as a rainbow, and in a world that is optimized for human life it’s sensible to conclude each color is there for a reason.

While every color is not visible in each and every rainbow, blue always is. This is an indication of the significant roles it plays, such as calibrating the sleep clock and endocrine system, a network of glands that synchronizes the release of hormones to allow you to achieve an optimal circadian rhythm.

The way blue light does this is by communicating with specific parts of the brain through receptors (or cameras) in the eye, which are known as melanopsin. These receptors see blue light—and blue light only. Just recently discovered (around 1998), melanopsin is only beginning to provide a greater understanding of how blue light informs circadian rhythm and hormone function.

Extensive studies have been done over the past several years regarding blue light, but just think of melanopsin as the necessary middle man that passes blue light’s messages from the sun to the brain, specifically the pituitary gland, where the messages are converted to instructions that are then delivered to the rest of the endocrine system.

Blue Is the Awake Light

If you had no melanopsin receptors, your pituitary gland would not be able to see blue light, and your endocrine system would not receive instructions related to hormone secretion in different parts of the body, such as cortisol secretion from the adrenal glands.

While cortisol is widely known as the “stress hormone,” this stress is appropriate, functional, and advantageous when released at the right time. Beginning your day, for instance, with the appropriate amount of cortisol feels more like energy and is essential for optimum health.

So, in terms of evolution, blue light is a color in the visible light spectrum that plays a vital role in your physiology. With this being said, it’s important to know that there are two types of blue light and how to make the distinction between them, so you are sure to get the right one at the right time.

Blue light from sunlight is also known as native blue light. You may have been told this, or just experienced it yourself, but blue light has a high color temperature and can be very intense.

Don’t be frightened, though—blue light’s temperature is regulated by the other colors in the visible and non-visible spectrum, specifically infrared light, and during certain hours of the day, ultraviolet light. These colors provide extraordinary healing that protect you from the intensity of blue light while reaping its benefits, and native blue light is never seen alone.

Non-native blue light on the other hand, which is in the LED and fluorescent light you will find everywhere from your phone to your grocery store, shares none of these other colors, which presents major health implications—from sleep problems to other less obvious ones.

Why Blue Light Is Not Supposed to Always Be Here

Remember, blue light wakes you up. Its interaction with melanopsin causes it to be “seen” by the pituitary gland—which consequently shuts down the pineal gland, whose job it is to release melatonin, the sleep inducing hormone. This is one reason why non-native blue light is so detrimental to sleep. Without melatonin, sleep becomes extremely difficult without outside help.

Humans evolved to be awake during the day, so non-native blue light sends mixed signals, which leads to a confused circadian rhythm.

Blue light is getting a lot of attention these days for disturbing sleep, but sleep difficulty isn’t the only concern.

The consequences of this impact are important to understand: once these molecules and receptors die, they never come back. And why would they? If non-native blue light was never part of nature’s plan, there would be no design to regenerate them.

In addition, the retinal molecules being destroyed are essential for the production of melatonin in the eye. That process is necessary for melatonin to be transported to the pineal gland and consequently released. Besides inducing sleep, melatonin is also the body’s #1 cancer-fighting agent.

Researchers are also beginning to discover mysterious diseases, such as macular degeneration, and other retinal diseases could be related to blue light related damage in the eye.

With all this said, many of these problems can be alleviated by simply wearing blue light blocking glasses, preferably ones that block blue light in the 400-500 nm range. The lenses of glasses that block this range of light appear orange, not clear. This is important to note since this is unregulated, and most advertisers sell clear lenses that don’t block what they claim they do.

So… How Should I Handle Blue Light?

Blue light is a color in the visible light spectrum that is both harmful and helpful. And modern-day living has made it easier to consume the harmful kind and more difficult to consume the helpful.

Non-native blue light is everywhere, but you may not think of it as blue since it actually appears white. This is a result of the light in our devices having all the colors in the visible spectrum removed, other than blue and yellow. If harmful blue light was actually blue, perhaps it would be easier to be reminded of its harmful effects.

Because technology has such a major role in our lives and has made life easier in many ways, even though it can be harmful to your health, it’s here to stay. The good news is that there are ways around this.

Blocking non-native blue light while getting enough native blue light, especially in the morning, is a great way to live an optimal healthy life and can bring you optimum sleep and energy—byproducts of a healthy circadian rhythm.

Now that you’ve learned how to optimize your sleep habits, check out our review of the best online mattresses to change the way you sleep forever.