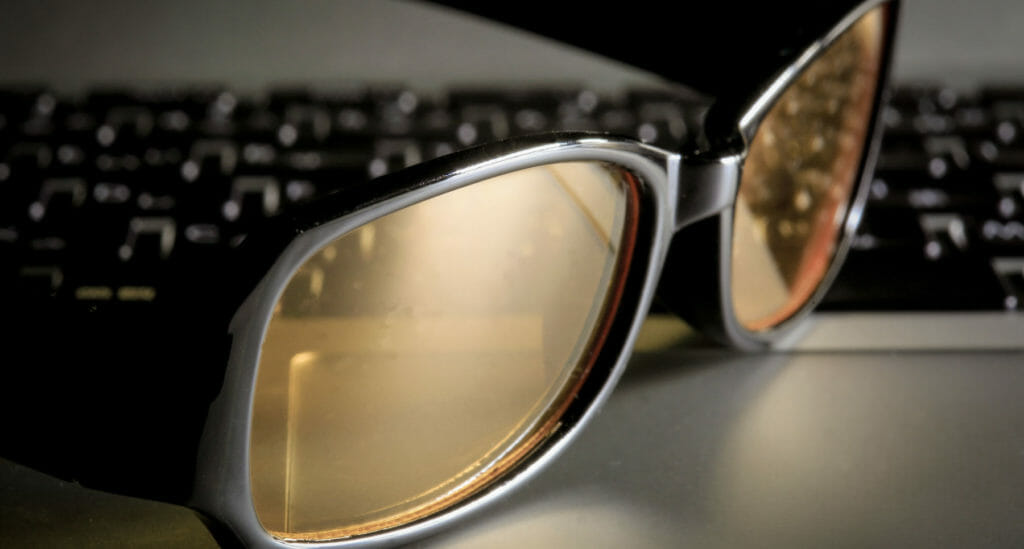 Wearing blue light glasses may be the fastest growing health trend, and with any health trend comes the debate of helpful vs fad—especially with sleep.

When you struggle mightily with sleep, falling for another fad is disheartening. And with a billion-dollar industry that’s always flaunting its next magic trick, skepticism is a necessary filter. So the question is, do blue light glasses work?

The short answer is yes, blue light glasses work, and they work best when they are used at the right time and block the necessary frequencies of artificial blue light—the light from electronic devices that produces very intense energy.

Due to their popularity and an emergence of uninformed retailers, it’s easier than ever to buy a pair of ineffective blue light glasses. To avoid this pitfall, I will take you through a simple but comprehensive explanation of the do’s and don’ts, and more importantly, explain why blue light glasses are an easy way to upgrade your health.

There are many reasons to wear blue light glasses, but if you are reading this, you’re most likely motivated to either alleviate symptoms associated with digital eye strain or improve your sleep.

Do Blue Light Glasses Work if You Stare at a Screen All Day?

If using your index finger and thumb to massage your eyelids is as much a part of your job as the projects you’re undertaking, you could be experiencing digital eye strain.

Physical discomfort or pain is a symptom of inflammation, which is your body’s response to infection, illness, or injury. If staring at a computer all day is creating inflammation, then we should take a look at what’s happening in your eyes when they are exposed to the blue light coming from your computer screen.

Here’s what you should know about blue light and retinal photoreceptors:

Artificial blue light dissolves signaling molecules inside the cells of these photoreceptors, eventually leading to the cells’ death. This is very worrying, because once these cells die, they cannot be regenerated.

For a precise visual, picture snow on a mountain melting under the hot “blue” sun. This is what the loss of life looks like in a cell, with no winter coming to create more snow.

The attempt of your cells to heal from this loss of life is likely what you experience as a symptom—the message from inflammation that there’s a problem.

There is abundant evidence now that blue light is highly inflammatory to all the cells in the body, especially the brain, which could explain some of the symptoms that come along with digital eye strain, like headaches and dizziness.

Staring at Your Screen All Day Doesn’t Need to Hurt

One of the reasons blue light coming from the LEDs that backlight your electronic devices is so inflammatory is this blue light lacks the other frequencies that accompany blue in the natural sunlight spectrum. Many optometrists I’ve interviewed have the opinion that artificial blue light is not a problem, since blue light from the sun is much stronger and not a problem for our eyes.

Be careful when you hear this.

What they are not equating is the “net” blue light—the blue that’s left over in LEDs after the other colors in the spectrum have been taken away. This net blue light becomes a sharp and intense peak of blue your eyes were not evolved to see, specifically the melanopsin receptors, that are only there to respond to blue light for circadian signaling.

These melanopsin receptors were discovered after many of today’s optometrists finished medical school, and unfortunately, many of them aren’t up to date on the latest discoveries.

Blocking a significant portion, at least half (450nm) of the blue light spectrum can reduce and even prevent digital eye strain caused by this peak. It puts us closer to how we were meant to see the color blue.

In any event, being in front of a computer all day is not ideal. However, getting regular sunlight breaks that introduce your eyes to the other colors in the spectrum can partner with blue light glasses as the best possible antidote to artificial blue light.

For this answer, you first need to know what causes sleep.

Sleep is a two-part process. In the first part, the sleep hormone melatonin is made in the eye. This occurs when sunlight interacts with an amino acid called tryptophan. In the second part of the process, the melatonin is slowly released from the pineal gland upon darkness, into the bloodstream, leading to relaxation and then sleep.

These two parts are bridged by the transport of melatonin to the pineal gland via the optic nerve.

Think of your pineal gland as a vase holding water (only this water is melatonin) and slowly distributing this water into the veins of a flower’s stem (your circulatory system) so that the plant’s foliage (your entire body) can blossom—with relaxation and then sleep.

When blue light communicates with your brain via photoreceptors in your eyes, melatonin can’t get into your “vase” and you become less able to store it.

Additionally, when blue light communicates with your brain, it signals that it’s daytime. Your pineal gland stops releasing melatonin, and your adrenal glands produce cortisol instead. It’s as if your brain has become jet lagged from flying across several time zones.

High-quality blue light glasses prevent blue light from communicating with your brain, allowing these two parts of the sleep process to occur without interference.

This is a good thing, though, because sleep induced by endogenous melatonin is what makes sleep healthy.

Although blue light glasses do let you get away with more, such as using technology up until bedtime, if your lifestyle is far from sleep friendly, they will not be as effective. If this is the case, getting the right mattress can help your lifestyle become more sleep friendly and, possibly, create a little more “sleep magic” for you.

Blue light is proven to cause eye damage and prevent normal sleep, and if you wear blue light glasses they can help you in a myriad of ways. However, many companies are selling glasses that do not work—because they do not block the appropriate amount of light, either during the day or night.

If you want to alleviate digital eye strain during the day, lenses that block a minimum of 450nm of blue light are appropriate. Through my own testing, I’ve found most retailers sell “computer” glasses that only block up to 420nm or 430nm.

An orange or darker pair of blue blockers could do the same job, but they may block too much blue light—which can make them less functional and even make you drowsy.

Blue light glasses do work, but they become ineffective when both consumer and marketer are unaware of the minimum scientific standard requirements. When this happens, glasses are sold that don’t block enough blue light, turning something that should be helpful into a fad.

Some Golden Rules to Make Blue Light Glasses Work for You

What Is Blue Light?