Does Melatonin Help You Sleep? 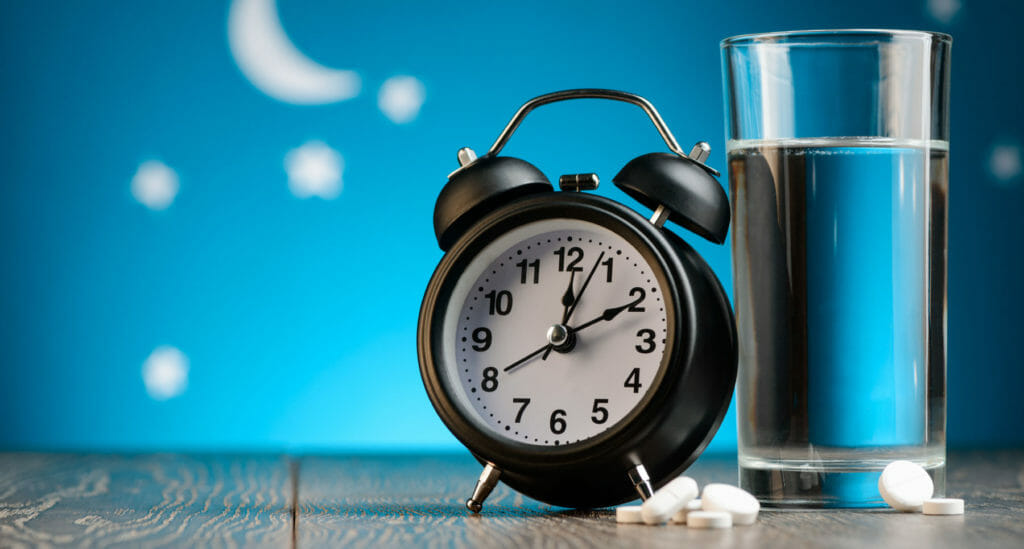 You can’t talk about sleep without talking about melatonin. Melatonin is the precursor to sleep and is responsible for that feeling you get when sleep is near. It’s also what keeps you asleep until your body naturally runs out and begins to prepare you for wakefulness.

Melatonin does help you sleep. And if you find it difficult to fall and stay asleep, making sure your melatonin levels are high is a good idea. But using a melatonin supplement properly can get confusing—and that results in a tendency for them to be misused.

Melatonin is known as the sleep hormone. It is made naturally in the body when sunlight reaches the eyes and interacts with the amino acid tryptophan. It’s then sent to the pineal gland to be synthesized and stored for nighttime release.

It is responsible for the majority of the processes that, when added up, constitute sleep—things like lowering inflammation, maintaining mitochondrial function, and scavenging the depths of the body to neutralize cancer-causing free radicals, just to name a few.

Because growing research has uncovered these benefits, we now have a deeper understanding of sleep, not just as a time to blissfully disappear and tally up energy, but the place where life is fortified and preserved.

Melatonin can be produced in two forms: endogenous and exogenous.

If a hormone is endogenous, it is produced entirely within an organism. An exogenous hormone is produced externally, from an animal, laboratory, or both. This is a better distinction than the widely used phrase “natural vs unnatural,” which can be confusing, since natural melatonin from an animal is still exogenous.

When it comes to melatonin and circadian rhythm, though—if you didn’t make it, it’s not natural.

To prevent ovulation from occurring, birth control pills introduce the exogenous hormone estrogen into the bloodstream. This may sound counter-intuitive, since estrogen is required for ovulation, but this method is highly effective because the presence of exogenous estrogen informs the brain that endogenous estrogen no longer needs to be made.

The same goes for melatonin.

How Does Melatonin Help You Sleep?

Outsourcing with exogenous melatonin informs the brain to stop making and releasing melatonin from your pineal gland, which is your instrument for rhythmic sleep. There can be a slight helpfulness with sleep, but it comes without the full cooperation from your pineal gland and the rest of the endocrine system—a very intricate system of glands, which is responsible for all hormone synthesis.

Picture traffic flowing smoothly through a bustling area of your city, with traffic lights and street signs orchestrating this flow. This is your endocrine system, only the cars are your hormones, the traffic lights are your glands, and the GPS syncing and navigating them is your brain.

Taking melatonin may free up a lane of traffic and assist with sleep, but by disregarding GPS (your brain), the other pathways in the endocrine system are not collaborating with sleep like they would if this sleep was the result of a natural circadian rhythm.

Exogenous hormones create an uncoupling process between glands and cells, breaking important links and bonds between them. In the case of melatonin, this uncoupling happens in the eye, where melatonin is manufactured. A number of studies indicate exogenous melatonin may create the conditions for such conditions as macular degeneration and blindness.

Melatonin Has a Time and Place to Help You Sleep

In a time where you can wake up in Los Angeles and go to sleep in London, we are left facing a paradox where taking melatonin is not natural, but neither is drastically changing time zones. In this case, you need to sleep but the conditions aren’t allowing it, so taking melatonin wouldn’t be considered so unreasonable.

What has become unreasonable with melatonin is the dosage.

When melatonin was developed as a supplement by Dr. Richard Wurtman and a team of colleagues from MIT, the suggested dose for effective use was 0.3 milligrams.

If you go shopping for melatonin, however, you will find doses up to 5 and 10 mg. This is due to melatonin not being regulated by the FDA—and it’s the only hormone that isn’t. Regarded as a dietary supplement instead, marketers have taken advantage of being able to up the dosage, thinking “more is better” when it clearly isn’t.

Such doses have an overwhelming effect on the body, like the feeling of a sleep hangover, and they create long-lasting effects by desensitizing melatonin receptors much faster. Melatonin receptors get to a point where they can’t recognize exogenous or endogenous melatonin, creating an unsleepable environment for the brain.

Unfortunately, taking melatonin is not a good idea for those who likely need higher supplies of melatonin the most. If you already have a high-functioning circadian rhythm and need to reset due to temporary circadian displacement from travel, taking melatonin can help you adjust to a new schedule rapidly.

If you struggle on a nightly basis, supplementing with melatonin may do you more harm than good.

I Know, You Just Want to Sleep

Making sure your melatonin levels are high is easier than you think.

While a lack of sunlight can be responsible for low levels of melatonin, nothing affects these levels more than artificial blue light—the light frequencies emitted from electronic devices and overhead lighting.

When artificial blue light enters the eyes, it sends a signal to your body’s master clock that it’s daytime. It shuts down melatonin release from the pineal gland and prompts the rest of the endocrine system to act accordingly, affecting more than just your sleep hormones.

Blocking blue light with blue-light-blocking glasses can fix this problem and create less of a need for you to take anything at all, much less melatonin.

At the same time, nothing can sync your sleep clock and melatonin production like natural sunlight early in the morning and throughout the day. Adding just 15-20 minutes more sunlight than what you currently see can make a big difference. Another step you can take to help sleep better is to find the right mattress, as the one you’re sleeping on could be hindering you from sleeping soundly.

What You Really Need to Know about Melatonin

Melatonin supplementation can get complicated if you are trying to fix an untimely sleep cycle once and for all. Logic says you can supplement with it for a couple of nights and no longer need it once you’ve been programmed to a new clock, but melatonin doesn’t work that way.

Taking melatonin does anything but help you make more melatonin, and that’s what you really need to do if poor sleep has been following you around.

It may introduce you to new and different sleep, but it likely won’t last. Or, if it does, you may find yourself contractually obligated to continue spending money on melatonin the supplement instead of using the melatonin you were engineered to make at zero cost.

Self-medicating with melatonin can help you sleep, but it is not the long-term answer to re-training your circadian rhythm.

Does Magnesium Help You Sleep?