What Is a Weighted Blanket? It May Be the Answer to a Better Night’s Sleep! 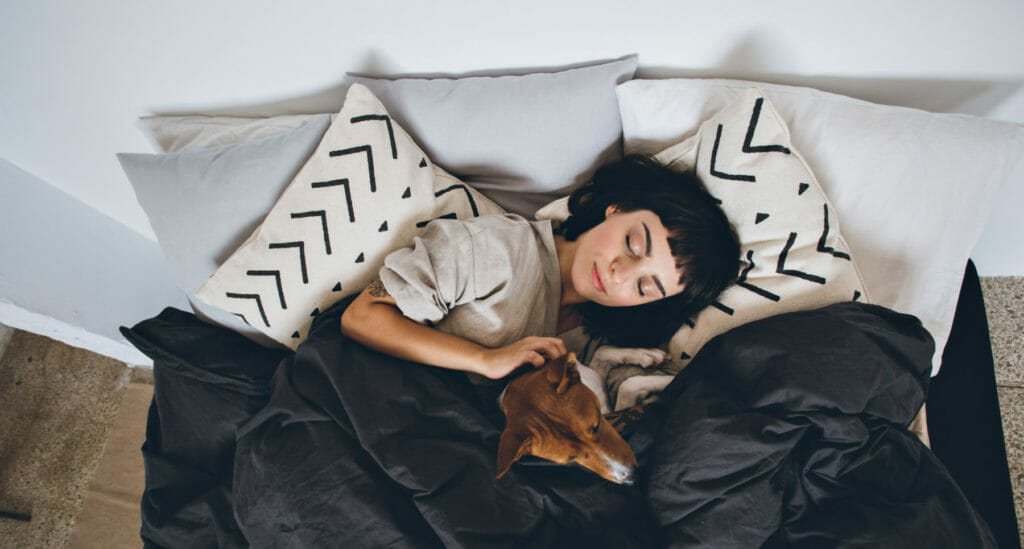 Unquestionably, there is a demand for this duvet-like blanket. Take the 2017 Kickstarter campaign for the Gravity Blanket—the project raised more than $4.7 million, when all they were asking for was $21,500. People with sleep issues liked the idea, and the weighted blanket has become a hot ticket item, second only to mattresses themselves.

What Is a Weighted Blanket and How Does It Work?

As the name suggests, a weighted blanket is weighed down to make it heavier. Tiny beads or pellets are sewn into quilted pockets to give the blanket an evenly distributed weight of between 5 and 25 pounds. The theory behind it is that this gentle pressure mimics the feeling of being hugged, which leads to a reduction in stress, thereby improving sleep.

A weighted blanket, as the theory goes, may help a person switch on their parasympathetic nervous system response. Just as a firm touch, such as a hug or massage therapy, triggers a release of dopamine and serotonin (the “feel good” neurotransmitters of the brain), so too do weighted blankets and other weighted items, such as a weighted vest. Both dopamine and serotonin are vital for mental wellbeing. Serotonin is also a precursor to melatonin—the hormone that aids sleep.

The Research On Weighted Blankets

Studies on the efficacy of weighted blankets are somewhat lacking. However, findings of a study published in the Journal of Sleep Medicine & Disorders in 2015 showed that a consistent and evenly distributed pressure, like that of a weighted blanket, may indeed improve sleep quality. Study participants using a weighted blanket slept longer, had a calmer night’s sleep with less movement, and reported feeling more comfortable and secure than without one. They also found it easier to settle down to sleep and awoke feeling more refreshed in the morning.

A study published in Occupational Therapy in Mental Health in 2008 found that 63% of participants who used a 30-pound weighted blanket reported lower anxiety after use and 78% preferred the weighted blanket to help calm them, as opposed to going without.

In another study, published in 2016 in the Journal of the Formosan Medical Association, participants who wore a weighted blanket during wisdom tooth extraction showed more activity of the parasympathetic nervous system, indicating lower stress, than those treated without the blanket.

The authors concluded that deep pressure stimulation may be a suitable therapeutic modality for people during or in preparation for stressful situations.

The History of the Weighted Blanket

A weighted blanket is not a new idea. The use of weighted blankets for therapeutic purposes was first introduced by occupational therapists incorporating sensory-based therapy for people with anxiety or learning and pervasive developmental disorders, such as autism and attention-deficit hyperactivity disorder (ADHD). Therapists observed that light touch actually put the nervous system on alert, while deep touch, or deep pressure, was calming.

Another study of 42 children (aged between 8 and 13), half of whom had ADHD, found that, for the children with ADHD, the use of a weighted blanket for two weeks improved the time it took them to fall asleep and reduced the number of night-time awakenings, at a level comparable to those children without ADHD.

Could a Weighted Blanket Help You Sleep Better and Stress Less?

It certainly seems so. For many people who suffer from stress and anxiety and have trouble sleeping, a weighted blanket is a useful, non-prescription tool for anxious insomniacs to get a good night’s sleep. While studies have shown these blankets to be safe, care is needed, as with any item, with frail or injured elderly and young children. If you are thinking of getting one, read the best-practice guidelines first.

In the meantime, there is no denying this cozy blanket has an enormous fan base, including celebrities like Kourtney Kardashian, JoJo Fletcher, and Vanessa Grimaldi. It just might be the ticket for you, too.